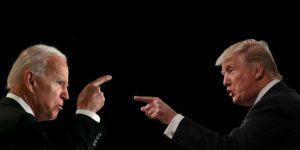 Do not jump to conclusions thinking that I will be writing about the evangelicals besides the many who have been named responsible for the country’s malady, Trump; but a few if none have pointed to who are the real responsible: The Democratic Party. Just go back a few years when Hillary Clinton lost to Trump and find the personages in the background: the main characterization has to be the disruption of an entire democratic party caused by Warren and Sanders. So, they went into the 2016 elections very fractioned as well as the intimal party culturalism unity. As it is happening now in the 2020 elections.

There are strong probabilities that Trump’s campaign tactics – the same he used to win his first presidential period – could give him the same results. Well, maybe (and this is just wishing) not, but for this paragraph let’s assume that it will.

I will not use any more epithets to refer to Trump’s personality traits; we all know which since he has not abandoned even half of one of the too many; but I do not think that that is why he gets elected. No, let me reason with you and blame the democratic party for being the procurer (yes, you could use the first definition too;) the democrats have been in disarray for decades, too much of everything and too much of nothing. What they lack the most is the ability to recognize when personal or group ambitions must be set aside and act in unison under one direction for the benefit of democracy, as it was four years ago, as it is now.

Biden does not possess a strong character and is just what the democratic party has. That is the first error in my view. Out of the too many probable candidates (I reiterated a few times my liking of Harris) they could not encounter another more suitable to their eyes, nor the eyes of their ruling elites. Responsibility must fall under these two groups and any other that contributed to bypass the extreme need of a better candidate.

Frankly, what I see is a strong discomfort among the party directives plaguing too whoever is around them, which definitely could be reflected in the number of votes. Who cares for the popular one since the electoral is the one that counts? What are the democrats doing to retain or regain the confidence of the people? What I see, again, is a disdain that misdirects the primary focus which is, not beating Trump; no, WINNING the election is what the perspective should be. This is the second error: The misconception of the purpose.

Obviously, the selection of Harris as Biden’s running mate was adequate, but she was not given the necessary pompoms or fire cracks and still is out of the picture. Third error. Bring her out. We all know that electing Biden all the odds are that he would probably die in his presidency and Harris will ascend to the throne. That is why she should be more out to the public. No misinterpretations please, of course, I wish the death of no one but here are the statistics: https://www.cdc.gov/nchs/fastats/older-american-health.htm

As the human race evolves discovering that the word unity is just one to use to influence another person or persons, the party should consider this reality – they are not united – and therefore should invoke a new study to find the expanding of the party’s purpose that includes all diversities – not only of a race – but also the ones containing innovating ideas that the party urgently needs.

Do not confide in inaccurate polls – the results are all maneuvered in either direction or do not indicate true values but just an anticipated pain produced by the reality of losing an election. Use it for the intended purpose though, which is lying to the voters.

One of the many consequences of democrats’ misbehaviors is what we have now (well, soon) a conservative Supreme Court with nothing that can stop it; any intents or pleads to stop the nomination will fall on deaf ears. Remember when Obama was elected in 2008? Democrats had the senate, House, and the Whitehouse. What did they do with it? Do not say Obamacare because it is moribund. Learn from those lessons.

Are the odds being against democrats to winning control of the Senate? Well, read what FiveThirtyEight says projecting 80% chance that they will:  https://projects.fivethirtyeight.com/2020-election-forecast/senate/; either party has a fair chance of winning the majority says the Cook Political Report: https://cookpolitical.com/ratings/senate-race-ratings, or bet on the elections: https://www.predictit.org/markets/detail/4366/Which-party-will-control-the-Senate-after-2020-election. Either option will find their channels of fluence perhaps helping some of the “fake news organizations.”

Referencing the 2020 presidential elections – luckily I am outside the United States saved from the inundation of political ads – are those who delightfully listen to the predictions of Biden winning as well as the Trump’s side. However, there are many polls to your preference, but most are indicating Biden as the one on top. Read this one: https://ig.ft.com/us-election-2020/.

So, is it either the Senate, the Presidency, or both? I would say to go for both with a big diving jump. Irreverently of the odds and polls it is a unique situation never been experienced or without precedence. Whatever can be lost has happened already; now, with the opening of the opportunity of having the three chambers back into the democratic party hands because progress has been detained for too long, could result in major changes to the systematic way of living to circumvent another Trump.

Trump will not transfer the presidency easily despite the comments emanated from some GOP Senators that when Biden wins power will be transferred peacefully. Because Trump is the dictator of the United States, not the president, he does what he wants and acts carelessly, unethically, unlawfully at times, chances are he will remain in power as the persona in charge until the winner of the presidency is decided by the Supreme Court.

One of Trump’s strategies could be the tangling of the election in litigation for as long as his team is capable to do. The worst? No one can do a thing about it; not the Supreme Court (Roberts could not break any more ties), not even the militaries – they are the American Nazism who is behind the scenes backing up Trump.

Do not put too much hope on faith expecting major political changes like in Florida. Hillary had high hopes of winning this state, and in the end, it went to Trump.

The expectations are intriguingly consuming passions all over the free thinkers and anyone else who has an unrestricted mind. You can run variables in whichever preferred direction, but one thing for sure is that we will be astonished by either one winning.

The truth is that Republicans want their old way of living exploiting mankind, democrats want liberty for all.