Interview with the director of the pan-African music festival Sauti Za Busara (Sounds of wisdom), which is celebrated in Zanzibar, Tanzania, since 2003.

In 2007, he received the BBC World Shaker Award, because of his “huge contribution both to the local scene in Zanzibar and to the global music scene”.

Yusuf Mahmoud participates this thursday in the international agenda (virtual) of the Pacific Music Festival Petronio Álvarez, concerted with the British Council of Colombia (arts management).

Mahmoud, born in the United Kingdom, has lived in the Zanzibar Island for years.

He is executive director of Busara Promotions, the nonprofit institution that organizes the Sauti Za Busara festival, which exhibits music of all East Africa and the continent in Zanzibar, Tanzania.

The event has been positioned like one of the most respected music festivals of Africa, and the Petronio Álvarez will undoubtedly be able to get learnings and opportunities from this relationship.

What idea or references from Colombia did you have before this invitation?

In the 1990s I became interested in Colombian music after being moved at shows by Totó la Momposina in UK.

Since then I have enjoyed discovering some of the country’s more urban music groups, including ChocQuibTown, Systema Solar and Bomba Estéreo.

Last year we invited Yembemá to showcase at Sauti za Busara festival in Zanzibar. Sadly, it was not possible for the group to raise the required sponsorship for their flight tickets.

If we were to go to the next Sauti za Busara, please tell us two more things we should see in Tanzania.

Sauti za Busara is a pan-African music festival held annually in Zanzibar during february. Celebrating cultural diversity, the unique mix of artists and audiences at Sauti za Busara are the key to its success.

The ancient Stone Town of Zanzibar is a UNESCO World Heritage Site. In and around the Old Fort, usually over four days and nights on three stages the festival hosts 44 live music performances by diverse artists from across the African Continent and diaspora.

Whilst visiting Zanzibar, we recommend people also make the most of the opportunity to enjoy the island’s fabulous beaches and diving locations, with guided tours of Stone Town, spice farms and Tanzania mainland safaris.

What kind of musicians performs at Sauti Za Busara?

The new generation keeps our festival fresh, relevant, and exciting.
Each year up to 75% of performers on stage are young, new, or upcoming talents, playing all styles from traditional music to rumba, jazz, hiphop, reggae, electro and Afropop fusions.

The Petronio Festival in Colombia is financed with public resources. How is Sauti za Busara financed?

Unfortunately, there is little or no state support for festivals in Tanzania.

A musician from Tanzania to seek and listen.

To date Sauti za Busara has showcased 175 groups from Tanzania.

A young upcoming group I recommend highly is Siti & the Band.
They are creators of musical changes, fusing their roots in taarab music with influences from their daily life. 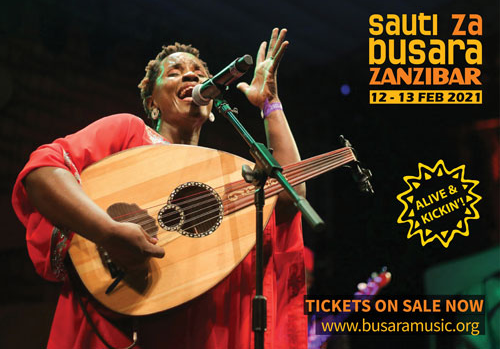 A Tanzanian literature writer to meet.

Abdulrazak Gurnah: author of Paradise, By the Sea, Desertion and many more (in English)

A film from Tanzania.

Bahasha (The Envelope) tells a universal story of bribery and corruption.

An international footballer from Tanzania?