Preliminary note: This column was originally published in Spanish, with the first names of its author in the only Spanish-language newspaper in the Middle East, El Correo del Golfo.

The Spanish word encanto, means in English, charm, but it is also related to the enchantment, a spell. In any case, something that produces a feeling of magical pleasure. Therefore, there is no better word to define the new Disney’s film than its own title; «Encanto» is simply an enchanting film.

«Encanto» is the story of a very special family (the Madrigals) that lives in the Andean mountains of Colombia, in which everyone has magical powers, except Mirabel, who despite her great personal qualities feels inferior for not having magical gifts. This film produced by Disney studio, is a very Colombian story, where women take on a leading role and it is no coincidence.

In Colombia, society orbits around the family and the family is supported by the figure of the woman. The character of Grandma Alma (Soul) represents the backbone of her family, whit wisdom and experience, but the female is also represented in physical strength of Luisa (the first Colombian Olympic gold medalist was a weightlifter woman) or in beauty of Isabela (the beauty of Colombian women is legendary), but most important in the intelligence, perseverance, and solidarity that Mirabel represents, the first Disney princess to wear glasses, which is a symbol. It is a feminist film, in the sense that it highlights the power of women, as the nucleus of society.

The work of the directors and scriptwriters Jared Bush, Byron Howard and Charise Castro Smith should be highlighted, because they interpreted the Colombian spirit very well and achieved something very difficult, synthesizing in a single place, the great natural and human diversity of Colombia. The number of details and references reflects a research work that captures real dream landscapes such as Caño Cristales (Crystal Channel or Rainbow River) or Cocora Valley with its immense wax palms of Quindío (Colombia’s national tree), as well as elements of our national identity, such as the ornaments of flowers, the emeralds, the vueltiao hat, the ruana (Colombian poncho), typical foods such as the arepa or the ajiaco (soup from Bogotá).

Music is the other protagonist. The great composer Lin-Manuel Miranda and her colleague Germaine Franco have reinterpreted Colombian musical genres such as cumbia or vallenato (in Colombia there are more than a thousand musical rhythms documented) and is part of everyday life. The soundtrack of Encanto is collectible, assembled by composer Germaine Franco, with the presence of Colombian musicians such as the legendary Carlos Vives or Sebastián Yatra, one of the stars of the new generation. The song “Dos Oruguitas” is an anthem and I would not be surprised if it was nominated for the Oscars, as well as the entire soundtrack, it would not be strange that would be a successful musical in the theaters of the world.

This film is the vindication of Colombia in the universal cinema, after years in which Colombia appeared misinterpreted, in films that supposedly took place in the country, but were filmed elsewhere and with characters that were no more than the bad guys of the history or secondary roles without relevance. The story does not ignore the issue of conflict, or of those displaced by violence, and keeps as a message the importance of reconciliation, the supreme good of peace, which is built with the effort of all.

A film that transpires Colombia through and that has magical realism in its essence. Yellow butterflies flutter, like coming out of the pages of One Hundred Years of Solitude. The spirit of Gabriel García Márquez rests in this film, fantasy stories that seem incredible and that he listened to his grandparents, like Alma, in his childhood home, the circle is closed. This is a true animated classic that will last for years, like the great Disney movies. A movie charm, with a name in Spanish and with the soul of Colombia. 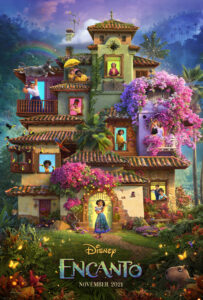 At the end an invitation, that everybody sees «Encanto». It is not just another movie, it is a work of art that moves, that achieves laughter, tears, and sincere emotion It will be the best Christmas gift of this year and for some people in long time, we will not have another like it. Dear friends of Disney, thanks a lot, for this movie from Colombia with love. Muchas gracias.

In Twitter sometimes I see charm movies as @dixonmedellin