Preliminary note: This article was originally published in Spanish, in the column that bears its author with his real surname in the newspaper «El Correo del Golfo», the only journal in Spanish in the Middle East. Here can to read: https://elcorreo.ae/opinion/cartas-sin-marcar/estrellarse-con-james-bond-sobrevivir-para-contarlo

In life I have met twice with James Bond, rather, with two actors who have incarnated him. In this same space, I have narrated an anecdote with the late Roger Moore, with whom I had the honor of maintaining correspondence; some of those emails were published at the time by a Colombian magazine. Moore was my childhood idol and was a lovely gentleman with a big heart, a great UNICEF ambassador.

Today I will remember my encounter, which was really a clash with another of my favorite actors in the skin of 007, twenty-one years after it happened. It was the year 1998 and my good friend Gustavo Paredes, worked in the Mission of Colombia to the United Nations in New York, I did not know that city, so I took a vacation and went to visit it. The Twin Towers still existed and in fact, I remember when we went to their city sight, that there was great security in the visitors’ entry, even a guard asked me if I had a knife, when some keys sounded the alarm. They took the mandatory photo that is known not for the purposes of the visitor’s memory, but for the archives of the security agencies.

That trip was memorable because the visitor has got New York into consciousness, a kind of odd memory, forged largely by cinematographic education, so many films that have been filmed there that one would think that it is not so difficult to bump into a star of cinema and for what I am going to tell, it seems not. We crossed with my friend the mythical Fifth Avenue and Gustavo was a few steps ahead, for my part I was half dumbfounded seeing the buildings around, when I stumbled upon a tall man with dark hair and darker lenses that went in the opposite direction, whom I stepped on with all my humanity.

I was in the middle of the conventional «sorry», recognizing my victim, who walked quickly with a slender blonde woman. Gustavo had stopped three steps forward, with an expression that made me confirm my impression. The man was nothing short Pierce Brosnan, who at that time was world famous for playing the British agent James Bond, a guy licensed to kill, even accidental treadmills like me. The moment, which really was an instant, a scene of a couple of seconds, in which one does not know whether to say hello, ask something, apologize again.

At that time cell phones only served for calls, so there was no possibility of the now so normal «selfie» and less at a traffic light crossing, with stomp included. So for Mr. Brosnan it had to be an awkward and fleeting incident, but for his attacker, one of those special moments, which motivate even writing a column, twenty-one years later.

Apparently, in those days Brosnan was in New York filming the movie «The Thomas Crown Affair» an adaptation of the classic film starring Steven McQueen. I have admired Pierce Brosnan since the days of the television series “Remington Steel”, which combined the detective genre with romantic comedy, in which Brosnan personified a fictional sleuthhound invented by a real detective (Stephanie Zimbalist), to give him more credibility to her agency. 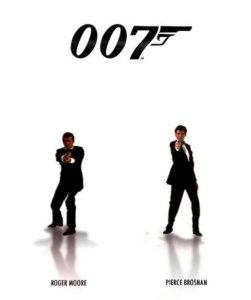 Anyway, I can attest that you can trip over James Bond and live to tell it, something like «To step on and let to live«, fans of the 007 saga will understand me.

On Twitter at times he bumps into movie stars as @dixonmedellin