In urban areas in developed countries, the contents of toilets and that of towns or cities, end up in a municipal-built and operated wastewater treatment plant.  But in developing countries, where infrastructure doesn’t keep pace with population, there is a good chance that it will end up in rivers and fields.

In India, for example, the effects of contaminated water are absolutely disastrous: nearly 400,000 children under the age of 5 in the country, most from poor families, die each year from diarrhea-related illness. Everyone agrees that fecal-oral transmission is the main culprit. That is, feces make its way into food and water, and from there, into the body. There are many ways for this to happen, but one of the most visible ones is the way in which huge amounts of human feces are dumped into freshwater sources close to urban areas.

With all of this in mind, a team conformed by social entrepreneurs Anisha Shankar and Mario Varón, came up with the idea of a system that doesn’t just reduce the amount of fecal contamination entering waterways in India, but converts fecal material into valuable products. The name of the project is Tansa Clean.

About 40% of urban homes in India aren’t connected to the sewer system. These homes call in vacuum trucks to empty their septic tanks. But Indian municipalities simply aren’t big enough to process the material from these homes. So once they’ve serviced the tank, truck operators frequently drive to the most convenient drop-off point, which is often the closest river.

The river starts to die as it sickens people around it. Lost workdays and the cost of medical treatment means that the Indian economy loses an estimated $120 million annually because of this. And nearly 70 of India’s rivers have such low levels of dissolved oxygen thanks to fecal pollution that they are unable to support aquatic life.

From waste to value: how?

In order to change this reality Tansa Clean proposes a transformational model of 4 actions: cooperate, connect, transform and impact, all connected by the notion that, if handled right, poop can be transformed into clean, highly renewable energy, and nutrient-rich, pathogen-free compost.

The idea is to use an anaerobic biodigester, a technology that uses bacterial action to break down organic wastes into methane and compost in the absence of oxygen; India has a large and growing number of them. Tansa Clean is looking to support the existing network of private operate vacuum tankers in urban areas in India, connecting them with biodigesters to guarantee a hygienic drop-off point. Once a truck has completed servicing a septic tank, it gets send to the closest municipal or private biodigester to offload. Biodigesters then process the waste and convert it into value, creating an impact in rivers and the environment in general, keeping them pollution free. Meanwhile, truck drivers get paid for each delivery they complete and Tansa Clean’s system will keep thousands of cubic meters of septic tank waste out of rivers leaving them a little cleaner.

To test the model, Tansa Clean is partnering with a biodigester operator in the state of Maharashtra in India. Their initial idea is to create a small network of vacuum truck operators in the closest big city and they will make deliveries to the digester. With this, they’ll trial the delivery system; measure what’s going in and what’s coming out; test for harmful pathogens; analyze the makeup and volume of methane; and see what farmers think of the compost. 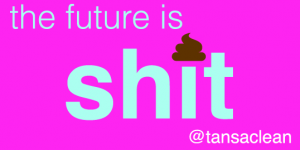 To secure funds for this first stage, they have launched an Indiegogo Crowfunding Campaign that seeks to collect USD$20.000. With the money raised through this campaign, the system will run for at least one quarter. Then, the team will work on growing their customer base, the network of trucks, and their impact.

You can still make your contribution and support them here; the campaign ends on November 14, 2013 (11:59pm PT). You can also follow the project’s news on Facebook and Twitter.