Without a doubt, Arianna Huffington is the most powerful woman in the media sector nowadays. Arianna is the chair, president, and editor-in-chief of The Huffington Post Media Group; a Pulitzer Prize winner for national reporting and author of thirteen books.

Originally from Greece, she moved to England when she was 16 and graduated from Cambridge University with an M.A. in economics. At 21, she became president of the famed debating society, the Cambridge Union. As he explains, it took her 36 rejections from publishers, a life-changing bank loan and 13 rejections more to publish her first book. 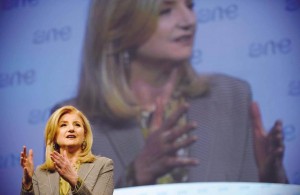 Redefining the metrics of success

We had the amazing opportunity to have Arianna as a Counsellor in the recent One Young World Summit in Johannesburg. In less than 30 minutes she defeated many our daily life behaviours, redefining the metrics of success beyond money and power.

As she urged us to leave our phones behind and listen to her, these are just some of the amazing life-lessons we got from Arianna herself:

-«Wellbeing is essential to being a good leader. If you’re not feeling well, you aren’t going to be as effective, or as creative, or as productive.”

-«We are living lives that are not sustainable, burnt out is the disease of civilization and burnt out people are going to keep burning out the planet.»

-«Sleep deprivation is for losers. Sleep deprived people make the wrong decisions. They miss the whispers and the signs and red flags… Sleep your way to the top.»

-«We’ve lost our capacity to wonder, to celebrate. We are missing the moment… Is anybody present? Is anybody really living their lives right now?»

-«A lot of the anxiety that we have is because we are either living in the past, reliving our mistakes, or we are living in future, worrying about what’s going to happen.»

-«We cannot let our own fears and our negative self-doubt get in the way. I call that ‘the obnoxious roommate living in my head’. It’s the voice that puts me down, that tells me I’m not good enough or smart enough… We can learn to smile at that voice and not take it seriously.»

-«The only thing we have is right now. Own it. Be fully present and from that place comes an amazing sense of trust in the universe.»

You can watch Arianna’s full talk in Johannesburg here: