Sophie Wall takes a last look at the uncertain debates surrounding the Scottish independence referendum, as Scots and their English neighbours await the tight results. 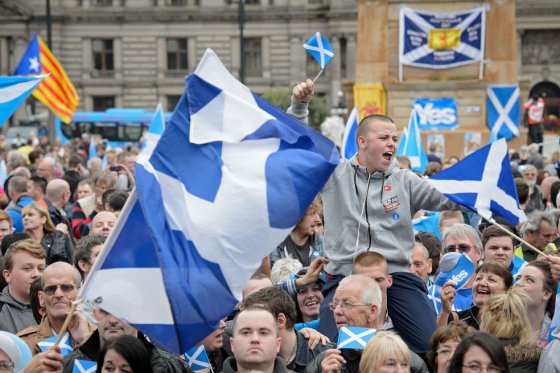 The last of the almost 4,300,000 people registered to vote in the Scottish referendum have now ticked their ballot papers, and the votes are being counted. Britain’s smallest historic county Clackmanshire, located to the north of Glasgow, and the Orkney and Shetland Islands have already counted their votes to reveal a no vote triumph. This result will bear little influence on the overall result, however, as it won’t be until votes from Scotland’s three major cities, Edinburgh, Glasgow and Aberdeen, come in between 3 and 5am British time that a clear idea of the referendum outcome will become evident.

Follow the below link for the live BBC polling results:

The latest polls from leading market research company Ipso Mori predict that the no campaign, otherwise known as the ´Better Together’ campaign, will win with a narrow lead of 53%. However, many commentators have highlighted the inefficiency of such polls, given that many voters were likely to have remained unsure of their decision up until they arrived at the polling station, and it is the first vote of its kind in over 30 years. And in hereby lies the great issue of the vote for a potentially independent Scotland: it is a leap into the unknown. No one has any clear idea of the ins and outs of what an independent Scotland will look like, and neither the Scottish National Party (SNP) nor Westminster politicians seem able to provide any coherent answer to the matter. Contradiction, rather, seems to be the prevailing theme.

For a little background on Scotland and Englands’ history and the referendum, here is a light-hearted Guardian video to help fill in the blanks:

This prospect for change is one of the arguments driving the yes campaigns, with the Guardian’s George Monibot highlighting that “to vote no is to choose to live under a political system that sustains one of the rich world’s highest levels of inequality and deprivation”. It is a sentiment also frequently highlighted by SNP leader Alex Salmond, dismissing traditional Labour party appeals that inequality experienced in both England and Scotland is better tackled as a united nation, with more economic security safeguarding its most vulnerable groups. This is the yes campaigns strongest bargaining point. The political system operating from Westminster is not just geographically but ideologically removed from the majority of the Scottish population, yet bears almost absolute control over what happens in the country. A very low percentage of Scots voted for a Conservative government in the 2010 election, while the UK’s nuclear weapons are stored off the west coast of Scotland despite the SNP opposing their presence. It is not surprising that when I asked several people why they would be voting ‘yes’, they simply replied that they were tired of the unjust status quo.

For some background on what it means to be both British and Scottish, and how this has changed over time, look at Alan Little’s BBC article, filled with archive material:

Underlying all this, however, is the not unimportant economic question. Is it worth risking economic security and the protection that the EU provides, to be free of the shackles of Westminster? Some have described the referendum as a decision that ought to be made with the head rather than the heart, as the potential economic consequences could be more damaging to Scotland than Salmond is letting on to yes voters. As aforementioned, independence brings with it many questions and no less risk.  Several unquestionably important issues, such as what currency Scotland will use, remain points of dispute between Westminster and the SNP, which James Ashton of the London newspaper the Evening Standard described as a “costly impasse”.  It might be that Scotland keeps the pound, with Salmond threatening to default on UK’s £1.3 trillion debt pile if England does not concede. A worrying declaration, as British prime minister David Cameron is refusing any consideration of the pound becoming Scottish currency and the National Institute of Economic and Social Research (NIESR) has said that pulling out on debt obligation would freeze Scotland out of the EU and international markets. According to the think tank this would force the newly independent nation to return «to a fiscal surplus and therefore unprecedented austerity», and ultimately its own currency within a year.

All of this remains speculation, however, speculation Salmond and yes campaigners have written off as scaremongering and dirty political tactics on the part of the Better Together campaign. Many yes supporters have not been dissuaded in any case, donning yes badges and taking to the streets of cities across Scotland to show their support for an independence in the days leading up to the vote. Statements from EU officials such as Jose Manuel Barroso and Spanish prime minister Mariano Rajoy, highlighting that Scotland’s renewed membership to the EU may be a lengthy and difficult process, have seemingly not deterred the masses. Perhaps they too consider it scaremongering, or perhaps they consider the collateral damage a price worth paying.

If Scotland vote for yes, an independent nation, they are voting for change, and the new possibilities and risk that come intertwined with it. Arguably, however, we are sitting on the cusp of change whatever the result.  Scotland has succeeded in shaking up the status quo in Westminster, a power dynamic in place for over a century.