In a public event of the Democratic campaign, the congressman highlighted the commitments that he would assume from the Committee on Foreign Affairs of the US Congress in an eventual victory for Biden-Harris. A fund of 25 million dollars to support Afro-Colombian communities is among the pledges.

On September 4, the virtual conversation Perspectives on the Vision of Biden-Harris on Afro-Colombians was held, Gregory Meeks, an African-American congressman who maintains a close relationship with Colombia; Liliana Ayalde, former US ambassador to Brazil and Paraguay; and Luis Gilberto Murillo, former Minister of Environment and Sustainable Development of Colombia were present for the virtual conference.

Additionally, Cristina Espinel, co-chair of the Washington D.C. from Colombia Human Rights; Yirlehan Ramírez, member of the National Association of Afro-Colombian Students (Asnea); Óscar Gamboa, director of Amunafro from Colombia, and Robert Asprilla, long-time activist in the United States were also in attendance.

Meeks spoke of the agenda promoted by Congress in favor of the Afro-Colombian population in the United States and Colombia. These are six commitments he would make in an eventual administration of Joe Biden and Kamala Harris:

1) “With Biden in the White House, I will urge them to reinvigorate the US- Colombian Action Panel of Racial and Ethnic Equality, which recognizes the important contribution of African descendent and indigenous people, and seeks to elevate the recognition of their culture.”

2) “In my role at the Foreign Affairs Committee, and hopefully as the Chair of that committee, I will be able to ensure that the Race, Ethnicity and Social Inclusion Unit at the State Department is protected and operational. This unit coordinates U.S. diplomacy on social inclusion and racial equality in the western hemisphere.”

3) “Promote stable democracies in the western hemisphere by implementing joint action plans between the U.S. and Colombia, and Brazil to support racial and ethnic equality.”

4) “Increase funding to expand state and USAID diversity hiring, retention, and promotion of our efforts for each work force including by supporting mid-career and senior professionals’ development opportunities and partnership with minority-serving institutions; the likes of Charlie Rangel and Thomas R. Pickering and the Donald M. Payne programs for undergraduate and graduate students.”

5) “Expand opportunities to minority-owned businesses to compete for the Department of State contracts and grants and to make sure we’re partnering with African-Colombians on the ground in Colombia.”

6) “A funding of 25 million dollars to support African-Colombian and indigenous communities.”

Gregory Meeks stressed that meeting these commitments requires a joint effort. “This task depends not only on us legislators, but also on the communities that must come up with creative ideas, energy and testimony. The Colombian business community must also act responsibly and help in all these efforts», he said. 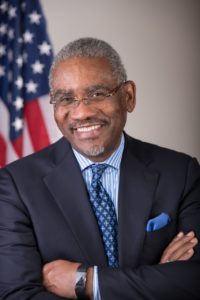 Gregory Meeks has been a congressman in the United States for 27 years, representing from 1993 to 1998 the thirty-first district, then the sixth, and now the fifth, all in New York State. He holds a BA from Adelphi University and a Juris Doctor from Howard University School of Law.

He has developed a close relationship with Colombia, supporting projects such as Plan Colombia: the Food Trade Agreement between Colombia and the United States, and the defense of Afro-Colombian labor and political leaders.

At the end of his speech, the congressman outlined his commitment to economic development and peacebuilding for Afro-Colombian communities:

«Sustainable peace in Colombia requires robust economic development that encompasses an intelligent trade policy and that provides the necessary assistance to affected communities, especially Afro-Colombian, in order to guarantee a broad peace stability that is our main interest,» he concluded.