The bet of the Colombian designer, who opened an Atelier in New York, puts «drama» in the arts bazaar that is Harlem, according to the concept of the expert Memsor Kamarake, consultant for the covers of important glossy magazines.

This newspaper, the oldest in Colombia (1887), South America, published this article in a Sunday edition. This is the link to the publication in Spanish. 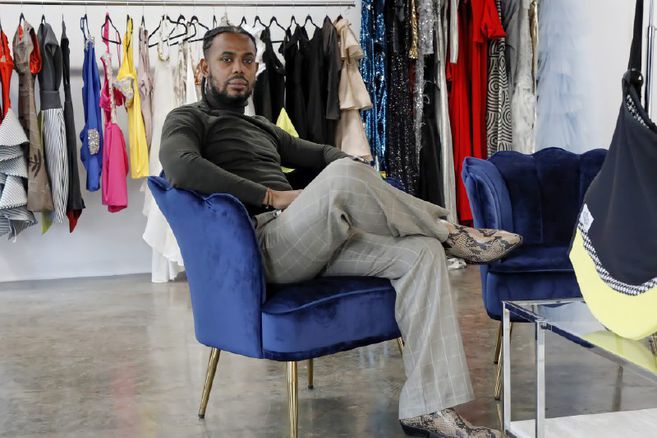 In the mythical Harlem in New York City – there are two ateliers of fashion designers from the community. One is that of Dapper Dan, the iconoclast punished and redeemed by Gucci, and another, a mile away, that of a designer who does not have that background, but who is making a name for himself. He is Edwing D’Angelo. A Colombian, from Buenaventura.

Two decades after opening his first workshop in the United States, D’Angelo opened a new location in Harlem. The historic African-American neighborhood, the cradle of legends like Ella Fitzgerald or Louis Armstrong, which today is a fashion and art bazaar that many New Yorkers see as the ideal catwalk to show off their best clothes and outfits.

Its streets tell stories. There is graffiti in memory of fallen leaders and street corners and parks that commemorate important events. Edwing D’Angelo’s workshop is located in one of those emblematic corners: on Adam Clayton Powell Jr. Boulevard (formerly known as Seventh Avenue) named in honor of the first African-American elected to the US Congress from New York, at the intersection with 131st Street. It is proud to display its «eclectic and authentic» creations, and to welcome its clients to offer them, in addition to fashion, a unique experience inspired by the diversity that has characterized the neighborhood and also its childhood years in Buenaventura.

In 1990, when he was 13 years old, he came to the United States. He did not find the city full of glamor and style that he imagined; perhaps because he had arrived in Jackson Heights, an area that was, at the time, inhabited, for the most part, by Colombian immigrants.

Although he always wanted to be a designer, his life took a different direction when, encouraged by his mother, he started working in law firms. However, designing was always on his mind, and he moonlighted in fashion during his spare time.

Driven by praise for his custom-made garments, he tried to work for others, but with little experience – the pay was very low. So in April 2001, he quit his job and opened his own boutique. It was a big room on Broadway with big windows. At first it was a success, but then something started to fail. «My desire to open was so great that as a novice and inexperienced I did not notice that in front of the store there was an elevated subway staircase that blocked the view, covered all the windows, and that began to take its toll after a few months», he says.

He already knew part of the world of fashion and design, and with that experience he made the decision to close his boutique and venture to explore other options and moved his showroom to SoHo. The opportunity came to be part of a designer’s collective called Edge NY, and that was what he dedicated himself to for four years.

From 2005 to 2009 he was in a designer’s mini mall in NoHo (Bleecker Street), and from 2008 to 2011 in a Showroom in Soho. From there, in 2012, it moved to the historic Limelight Shops, a boutique mall that had previously been a church. Edwing D’Angelo rented the attic overviewing the whole interior of the edifice. «It was a beautiful place, colored glass windows and the most amazing ray of lights came in.»

D’Angelo says that one afternoon Tyra Banks, a famous supermodel, actress and TV personality, entered his boutique and was attracted by the unique style of the garments. Days later, her fashion stylist contacted him and asked for an exclusive design for the celebrity’s show All-Star season of America’s Next Top Model. From that moment more opportunities to dress great personalities arose. At that time he dressed Nelly, Patti Labelle, Nick Cannon, Sean Paul, among others.

In 2015, the property was sold and D’Angelo went up in the air. Years followed in which he tried to venture into online sales, but it did not work for him. «I need contact with people, selling online without being able to see the expressions on their faces when customers see the garments or being able to advise them well, it just didn’t generate any emotions for me.  It is an experience for me.»

He put e-commerce aside and dedicated himself to traveling and doing shows. He participated every year in New York Fashion Week, producing his own runway presentations, and overseas in Egypt, Italy, Bolivia, Dominican Republic, Panama, British Virgin Islands, Puerto Rico, Mexico, etc. He participated in Colombiamoda in 2016 presenting his Origen collection. In which show, he predicted that in the future fashion will be worn with protective gear befitting his models to grace the runway wearing gloves and masks.

After four years of waiting, he was able to rent the place of his dreams in Harlem, the neighborhood where he grew up. «It was the place I wanted, but the first time I tried to secure it, I didn’t have the requirements to sign the contract.» He adds that he refused to have a co-signer or guarantor to sign on his behalf. When he thought he had solved the obstacles to be able to rent, the pandemic lockdown was imposed. So it was until this March that he was able to open the doors of @EdwingDAngelo Atelier. New York fashion blogs and media outlined his return to Harlem in detail.

It is an open concept industrial-type place located in a corner, it has huge wrap-around wall size windows. «It’s a permanent billboard.» From the outside, people can see the boutique and part of the clothes that are featured, there is a reception room and if they cross the corner they can see the workshop where all the action and the process of creating the garments takes place. The 40 foot permanent runway is the center of attraction. «People stop and get out of the cars to take pictures with the featured mannequins on display, that fills me with pride and reinforces my creative game.»

The workshop has ten workers – all Latino – including tailors and seamstresses, however, the executives or front of the house are all Americans. Edwing D’Angelo’s designs are unisex, they can be worn by anyone, a proposition that appeals to a range of “open-minded” clients. It is no surprise that the designer is heavily supported by the LGBTQ+ community and also by women and young people who seek him out for various occasions.

Memsor Kamarake, a fashion stylist who has worked with personalities such as Barack Obama, Megan Thee Stallion and Regina King for different magazine covers, expresses that this new atelier is a space that has generated conversations positive in Harlem and that has all the drama that has characterized the designer in his shows.

For Edwing D’Angelo it is the place he always wanted and that will allow him to fulfill his goal of offering experiences through the design and sale of luxury clothing. His affiordable garment, a T-shirt, can be purchased fir $200, and the most expensive petticoat, $3,500. Hence the term atelier, which he began using several years ago through hashtags to promote his designs and which he ended up «manifesting until it became a reality».

With the project of resident designers in his store, he wants to promote talents from New York and Colombia. He will return to e-commerce, with alow cost clothing line, after visiting Medellín and learning more about its well-trained labor force in manufacturing. He dreams of seeing his designs displayed at his own boutique in Cartagena. For now, it already has partners to open boutiques in Atlanta, Houston and LA  and is preparing its participation in the Big Apple Fashion Week.

* From the Color Foundation of Colombia.