The former US ambassador to Brazil and Paraguay, of Colombian descent, was a guest speaker at a public event of the Democratic campaign about the agenda for the Afro-Colombian population in a potential Biden-Harris government.

She highlighted the environment preservation as a key need for the Afro communities in Colombia and asked to vote for Biden as president. 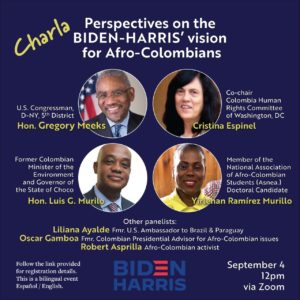 On September 4, a virtual conversation called Perspectives on the vision of Biden-Harris for Afro-Colombians took place, invited guest speakers were Liliana Ayalde, former US ambassador; Gregory Meeks, an African-American congressman who maintains a close relationship with Colombia, and Luis Gilberto Murillo, former Minister of Environment and Sustainable Development of Colombia.

Other attendees were Cristina Espinel, co-chair of the Colombia Human Rights Committee in Washington D.C.; Yirlehan Ramírez, member of the National Association of Afro-Colombian Students (Asnea); Óscar Gamboa, director of Amunafro in Colombia, and Robert Asprilla, long-time activist in the United States.

«I know that candidate Biden knows Colombia and would do an excellent job strengthening relationships and promoting projects for the Afro-Colombian population», Ayalde said during her speech.

The former Colombian descent ambassador –her mother was born in Tumaco and her father was born in Valle del Cauca- highlighted the projects that she promoted as part of USAID and that could be extended in a possible government of Biden-Harris.

She said that one of the key points on her agenda was to make visible the problems of the Afro-Colombian population. “Visibility was a very important issue on our bilateral agenda. With the work of Congressman Meeks and Afro-Colombian leaders in Washington, such as Luis Murillo and Óscar Gamboa, we managed to put the Afro topic on the agenda. I have no doubt that it will continue with Biden-Harris ”.

She highlighted the work that made possible to obtain resources to design economic development programs for the Afro-Colombian population. The program is still on and is held every year. «Without that leadership that existed since 2008 and continues to this day, it would have not been possible to have those resources that are extremely important to implement these development programs.»

Ayalde said that the Afro and indigenous populations in Colombia have been disproportionately impacted by the internal conflict and inequality, therfore it was necessary to create exclusive and differentiated programs for them.

It may interest you: Gregory Meeks’ commitments to Afro-Colombians if Biden-Harris wins

Among them, she highlighted a Fulbright scholarship program that benefits four Afro-Colombians to study masters and doctorate programs in the United States each year, these students then return to the country to hold public office or exercise leadership roles in their communities.

She also mentioned the Martin Luther King scholarships, a program aimed at strengthening the English and leadership skills of young Afro-Colombians, giving a boost to their careers and professional life.

Liliana Ayalde, born in Baltimore in 1956, is an American diplomat who served as the United States Ambassador to Brazil and Paraguay. She has also been Deputy Secretary of the United States Department of State, responsible for the Offices of Caribbean Affairs, Central American Affairs, and Cuban Affairs.