The image of Francois Pienaar receiving the Webb Ellis Cup from Nelson Mandela in 1995 is one of the most iconic moments in the history of the Rugby World Cup. 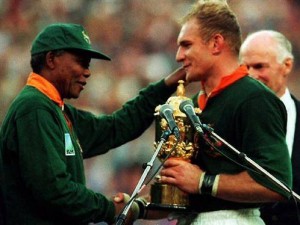 Between 1994 and 1995, South Africa was going through a historic transition away from apartheid. Mandela was carefully steering the country from minority white rule to majority black rule through difficult and sometimes treacherous negotiations. During this time, Mandela had taken in interest in rugby. The national rugby team, The Springboks, had only one black player on the squad, Chester Williams.

The power of Rugby to unite a Nation

As both South Africa and The Springboks entered international mainstream news, and encouraged by Mandela himself, Pienaar, Captain of the team, used his elevated position to advocate for national reconciliation, stating that the team represented the entire nation of South Africa, not just the white minority. Mandela also encouraged the nation’s black population to get behind the previously detested Springbok team as South Africa hosted the 1995 Rugby Union World cup.

When the impossible becomes possible

The Springboks were seeded ninth in the World Cup tournament and not expected to dethrone incumbent champions Australia. But in a stunning match, they defeated the Australians in the first round, 27-18. Then in successive games, the Springboks defeated Romania, Canada, Western Samoa, and France. South Africa and New Zealand met in the final round at Ellis Park Stadium in Johannesburg. Pienaar played on in extra-time despite a calf strain and the Springboks secured a three-point victory with a drop goal from Joel Stransky.

During the remarkable post-match presentation ceremony Nelson Mandela, wearing a Springbok jersey bearing Pienaar’s number, presented him with the Webb Ellis Cup. In his acceptance speech, Pienaar made it clear that the team had won the trophy not just for the 60 thousand fans at Ellis Park, but also for all 43 million South Africans.

In the words of Pienaar

It was a real pleasure to have had Francois Peinaar as a Counsellor, telling us his story during the One Young World Summit in Johannesburg, at one of the Special Session of the event: ‘Knowing Mandela.’ If you want to know more about the life of Mandela or Madiba, as he is called by his family and friends, you can check the Session with Pienaar; the great Ahmed Kathrada,who serve with Mandela in the African National Congress before they were arrested and convicted, spending 26 years in prison, 18 of which were in Robben Island along with Mandela; and the young South African woman Nobelali Dakanzele, here (minute 59):