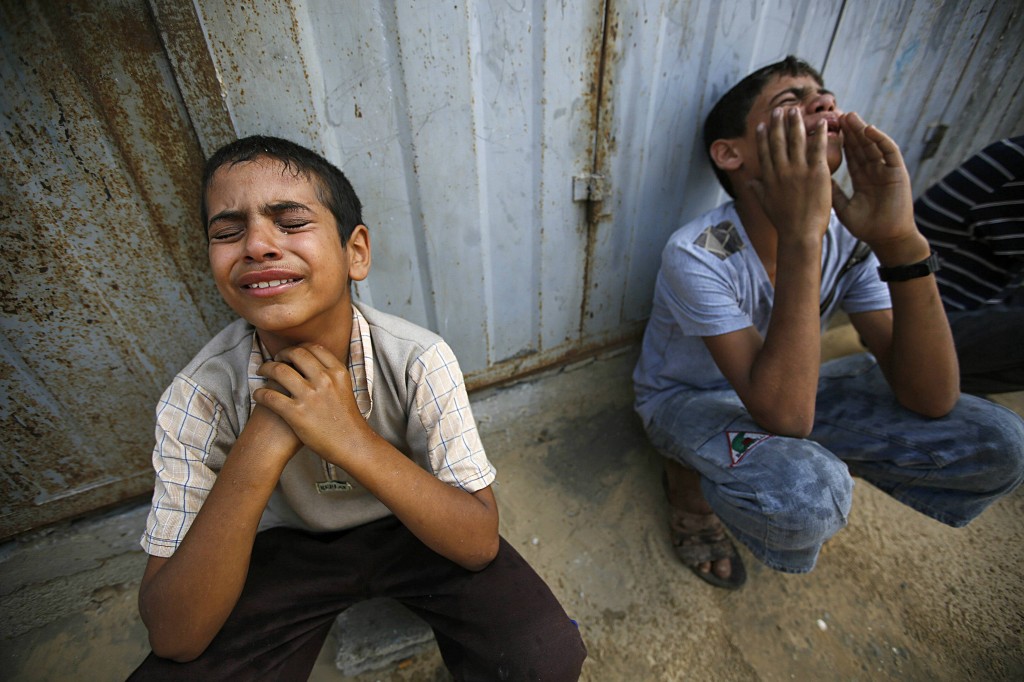 I look at my older daughter, who is about to turn 7, as we stand in the stairwell. She’s extremely tired, but her eyes are wide open. I just woke her up in the middle of the night, shaking her quite vigorously as the sirens began to wail in my city of Bat Yam, a suburb of Tel Aviv, warning us of incoming rockets.

The Hamas missiles aimed at our area give us about a minute to find shelter. We live on the 3rd floor of an apartment building, so it’s not enough time to go down to the basement bomb shelter – especially while holding children. So we stay in the stairwell with our neighbors, some coming out of showers with only towels to their bodies, some in their pajamas. Some of them I’ve never met. We smile and try to joke a bit.

And then, above us – boom! And then another. At first we don’t know if it’s the sound of a hit, but it’s most probably the sound of the interception of the rocket by Iron Dome, the Israeli missile-to-missile defense system.

It’s a sound we’ve gotten used to in the past couple of weeks. Well, not exactly “used to.” It’s still unnerving. I hold my daughter closer to me. My wife is holding our 4-year-old daughter. Thank G-d she’s still asleep. I think about how this isn’t how we planned on spending our summer. We were going to play outside, swim in the sea. Not stay indoors all day and huddle in the stairway every night.

And I wasn’t planning on biting my nails down to the bone when I drop the girls off at summer camp and drive to work half an hour away. There, my only connection is the WhatsApp message from the camp instructors saying all is OK after I hear the sirens go off. “We’re in the school bomb shelter, all the children are fine, no need to worry,” the message usually reads. But I worry.

How did we get here? How did we reach this situation of Operation Protective Edge, of over 850 Palestinians and 35 Israelis killed, one Thai citizen, and the numbers rising by the minute?

If we look at recent events alone, it’s actually quite clear. Israel may not have initiated the recent escalation – but she certainly encouraged it. The breakdown of peace talks between Israelis and Palestinians in April and the complete Israeli rejection of the Hamas-Fatah unity government brought tension to an even higher level. 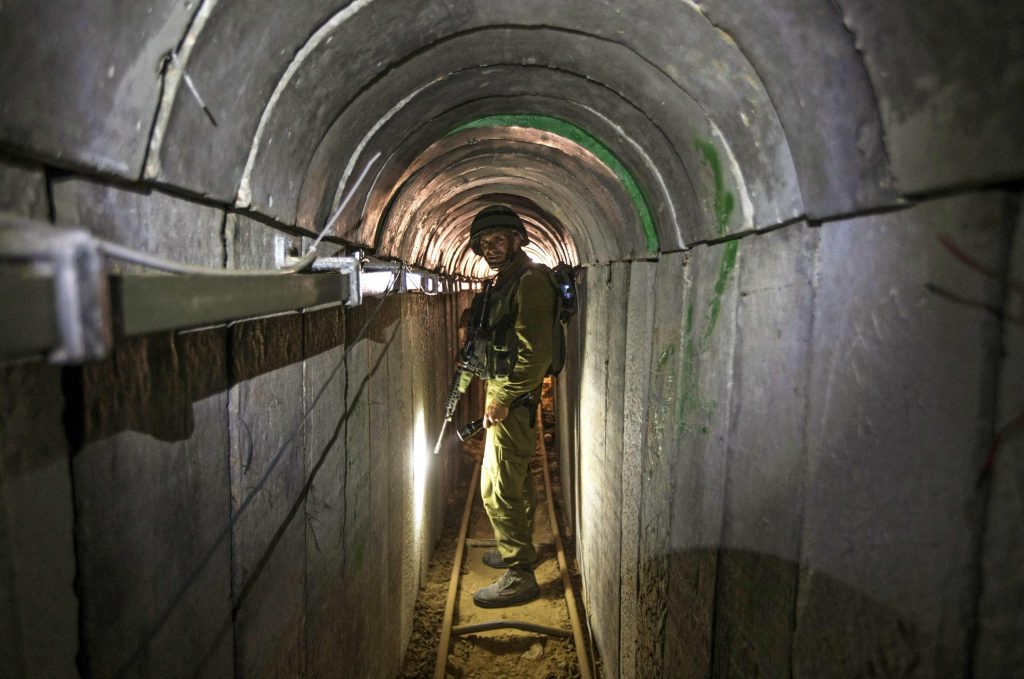 Soon after came the tragic kidnapping of three Israeli teenagers in the West Bank. Pouring oil on fire, Prime Minister Benjamin Netanyahu immediately blamed Hamas for the kidnapping – and continued to blame them after their bodies were found – even though he has yet to show any evidence of Hamas involvement. It appears the kidnappers may have been part of a rogue group of Hamas operatives who did not get orders from Hamas leadership. Hamas certainly didn’t make things better when its leadership applauded the kidnapping upon hearing about it.

Furthermore, the three week search for the teens was disguised all along as a hostage-rescue effort, even though the government knew they were dead. Netanyahu used this period to further indict Hamas and to literally declare war on all Palestinians, as Israel arrested hundreds of them in the West Bank and returned to conduct targeted killings in Gaza.

The incitement led by Israeli politicians during this period brought about an atmosphere of so much hatred for Arabs in Israel, that it allowed one of the most brutal murders this country has seen: six right-wing Jews kidnapped a 16-year-old Arab in East Jerusalem, beat him and set him on fire in a nearby forest. The murder immediately sparked riots in Palestinian East Jerusalem and also in Palestinian cities inside Israel proper.

With such tension in the air, and especially after the IDF killed as many as nine Hamas men in a Gazan tunnel (saying it was going to be used for a terror attack), an extremist organization like Hamas really didn’t need much excuse to start firing. From there, the escalation went down the familiar route of hundreds of  Hamas rockets, heavy Israeli air strikes, Hamas attempts to infiltrate Israel, and finally an Israeli ground incursion.

The result has been devastating, as one could expect in such a disproportionate war, between one of the richest and most powerful armies in the world to a guerilla group. UN figures show around 80% of the dead in Gaza are civilians. These numbers do not bode well for a country claiming it goes to great lengths to keep civilians out of harm’s way. Unfortunately, it gets worse: over 130 children – including 11 babies – have also been killed. These are actions committed by what Israelis continue to call the “most moral army in the world.”

A number of these children died this last Sunday evening, in what can be only labeled as a war crime. In an attempt to kill Hamas activist Ahmad Sahmoud, the IDF dropped a bomb on the building he was in that evening. Problem is, this building was the home of the Abu Jame’ family. The attack indeed managed to kill Sahmoud – but also 25 other innocent members of the family. 18 of them children, babies, a pregnant woman and more.

Israeli media barely discussed this event. It was totally immersed in the casualties on its own side. It is, of course, understandable to focus on your own “team”, but one would think that tragic events such as the Abu Jame’ massacre need to be talked about. Apparently, Israelis are fine with this kind of collateral damage. Apparently, they are fine when an army general says, “Yes, I see there are 25 innocent people inside the home – but their lives must be taken with that of the Hamas operative.”

Is this the morality they speak of? Personally, I believe such low standards of morality can only be the product of systemic racism ingrained into Israeli society over generations and through its education system. To be so apathetic to the killing of 130 children in order to “teach those guys a lesson” is nothing but the result of racist ideology. 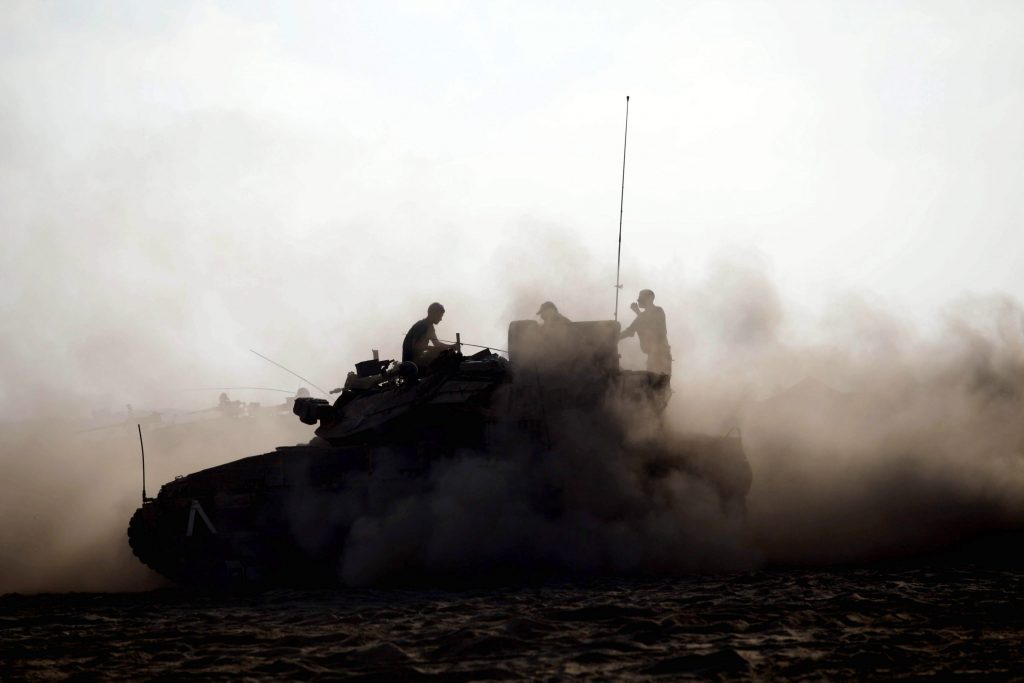 These days, the racism comes out in full force when the canons are firing. A prominent rabbi, Dov Lior, called for the destruction of Gaza and gave permission to kill innocent civilians. Left wing activists protesting the operation have been beaten by right wing activists. Celebrities who utter a word of solidarity with Palestinian victims are shun and forced to apologize so they don’t lose their ad campaigns. I am ashamed to say that even I myself am very careful with whom I share my opinions, considered by many here to be radical and treacherous. I’m scared.

As I mentioned above, this is only looking at events that occurred in the past few months, with a focus on the recent weeks of Protective Edge. But the ‘blame game’ of who shot the first shot isn’t really that important. What is important is taking a step back and looking at the whole picture, which is a portrait of occupation, of denial of basic human rights from millions of people, of land theft, of apartheid – for almost 50 years. Israel is a colonial enterprise holding millions of people under military rule, and the world does nothing about it.

Sure, Hamas controls the Gaza Strip, but only as the largest open air prison in the world. It is managed from the outside by Israel, who decides what goes in, how much goes in, and who goes in. In the West Bank some areas are managed by the Palestinian Authority, which makes the occupation much easier for Israel, so it won’t have to manage the civilian issues themselves anymore. And if either of them steps out of bounds, Israel will always know how to show them some tough love, just like it is as we speak. And just like it will do in years to come.

Let me be clear – I do not condone Hamas firing rockets on civilians. Civilians like me and my family! These are war crimes, too, and Hamas is an extremely dangerous organization. I’ll give them credit for one thing, though: at least they aren’t claiming to be the most moral army in the world.  When they kill 30 soldiers and 3 civilians – and the IDF kills hundreds of people who are mostly civilians – who exactly is the terrorist here?

Back in the stairway, I look at my daughters again while Hamas missiles fly above us. I think of the dozens of Palestinian girls their age who recently died from one-ton bombs dropped by F16s, of the fathers digging their bodies out of the rubble with bare hands, of the mothers weeping and clinging at their torn clothes.

I feel the anger rise inside me, and I say to myself “Not in my name.”

I say to my fellow Palestinians: “Not in my name!!”

*Ami Kaufman is a co-founder of +972 Magazine (972mag.com), a collective of Palestinian and Israeli journalists committed to human rights, freedom of information, and ending the occupation.